Raskar, who directs the Camera Culture research group at the MIT Media Lab, is this year’s recipient of the Computer Graphics Achievement Award.

The acronym ACM SIGGRAPH stands for Association of Computing Machinery’s Special Interest Group on Computer Graphics and Interactive Techniques. Its annual conference started in 1974, with computer graphics visionary Carl Machover (whose son is Media Lab principal investigator Tod Machover) among its revered pioneers. Since the 1970s, SIGGRAPH has grown into the world’s largest conference in the field — a venerated venue for sharing new technology and research.

Raskar has been among those presenting in the past. “Ramesh has made many seminal research contributions over the past two decades,” said Cohen. The 2017 award specifically cites Raskar’s “numerous, impactful research contributions in computational imaging and light transport. Ramesh has advanced the field in a wide variety of areas, including femto-photography, light-field displays, and augmented reality.” SIGGRAPH also recognizes Raskar’s work with colleagues on “compassionate applications for cutting-edge imaging technology” such as the work he’s done in improving eye care in the developing world. Raskar is also the founder of Emerging Worlds, an MIT-based group that’s focused on rolling out innovative citizen-based technologies using a framework that supports the wide-ranging needs of urban populations. It’s a co-innovation initiative aimed at solving problems in areas such as health, education, financial inclusion, food and agriculture, housing, transportation, and local business.

“The world really is our lab,” Rasker told the audience at the awards ceremony in Los Angeles several weeks ago. In a presentation after he accepted his award, he talked about how SIGGRAPH has evolved over the years: “At first it was about learning in the sandbox of entertainment and gaming. Now we’re looking at how we can have an impact on the whole world, and have a global awareness.”

“We are thrilled to be honoring Ramesh with this award and, in doing so, to continue our longstanding relationship with MIT,” said Jeff Jortner, president of ACM SIGGRAPH. “Year after year, researchers and leaders from MIT continue to put out amazing work that pushes the computer graphics industry. Our organization, and especially our annual conferences, are pleased to be serve as a platform for sharing that work.” 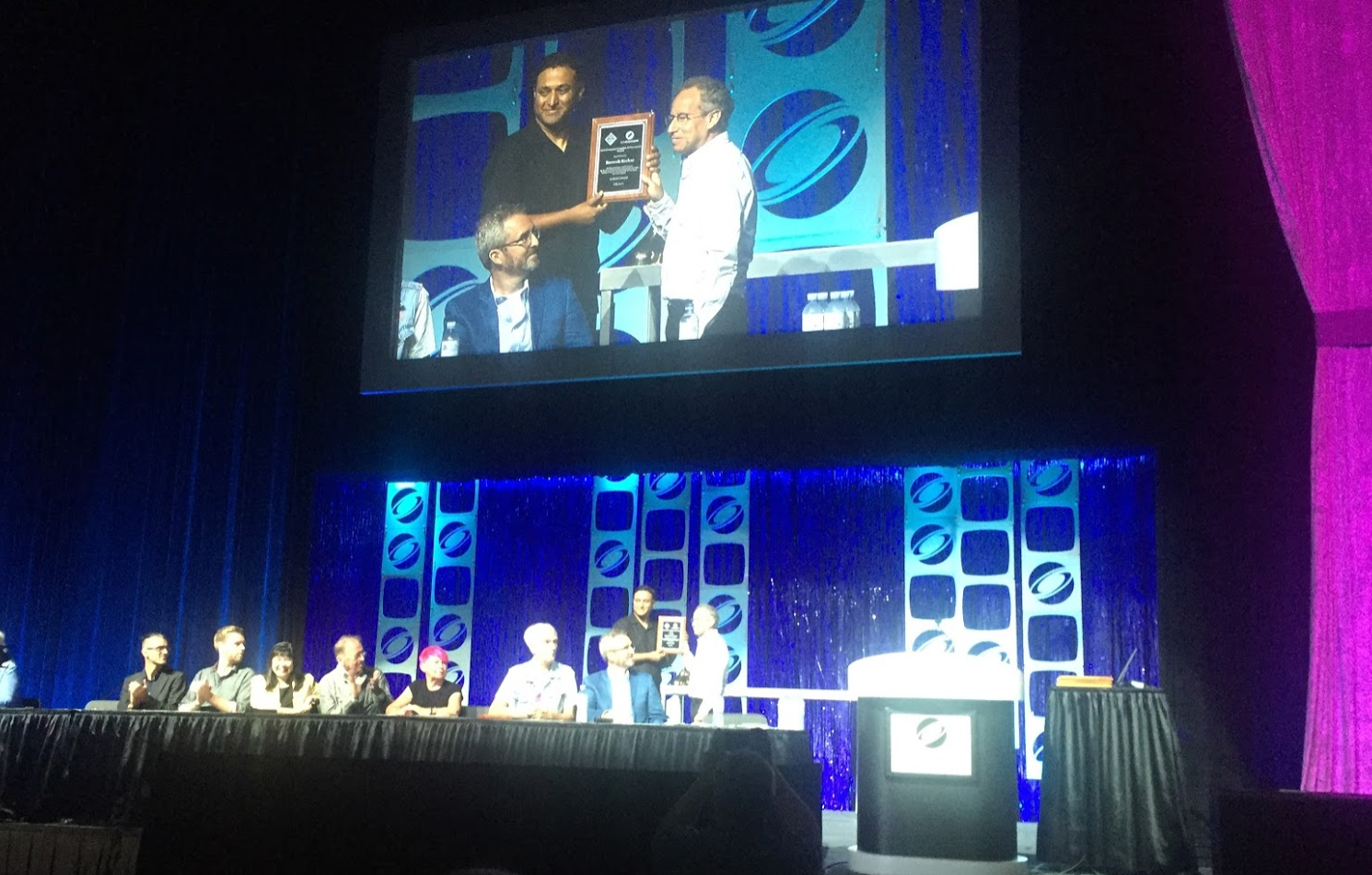 In accepting the award, Raskar acknowledged other exciting research at the Media Lab, such as that of Mediated Matter group head Neri Oxman who has spoken at previous SIGGRAPH events. Indeed, the Lab has long had a significant presence at the annual conference, especially as speakers and panelists. In the mid-1970s, Nicholas Negroponte (who later co-founded the Media Lab) presented several seminal papers on interactive and computer graphics. His successor, Media Lab Director Joi Ito, was the keynote speaker in 2015, highlighting the intersections of creativity.

As well, the Lab’s Tangible Media group has delivered papers at past SIGGRAPH gatherings. Hiroshi Ishii, who directs that group, said he and his researchers are now more involved with the Association of Computing Machinery’s special interest group on human-computer interaction (ACM SIGCHI). “Presenting full papers, participating in the panel discussions, and demonstrating the systems at Emerging Technologies, Tangible Media could make solid impacts in the computer graphics and human-computer interaction communities. We also learned a lot from the audience feedback at SIGGRAPH.”

The Media Lab’s Responsive Environments group has also given to, and gained from, SIGGRAPH connections. It was represented this year by Don Derek Haddad who presented a paper, called Resynthesizing Reality: Driving Vivid Virtual Environments From Sensor Networks, based on the DoppelMarsh project.

“SIGGRAPH has always been fascinating to me,” said Responsive Environments head Joseph Paradiso who has showed many projects at SIGGRAPH and also ran the Emerging Technologies sessions in previous years. “It’s a unique meld of hard engineering and aesthetic — graphics embody deep technology and embrace the arts as well.” Paradiso added that SIGGRAPH embraces many perspectives and is a great place to give your work a lot of exposure. “As graphics have become more mainstream and many of the hard problems are ‘solved’ (although there are always more!), SIGGRAPH has increasingly incorporated interaction technologies, music, and other related fields, which makes it more relevant to much work at the Media Lab.”

View past newsletters to get updates on group research, awards, and initiatives:

Talking with Maggie Church: MIT staff are "part of it all"

Get to know more about Maggie Church, the program coordinator for the City Science research group, through this MIT SA+P profile.